Imagine: Writing in the Community

A collaboration between communities in Rotherham and the University of Sheffield 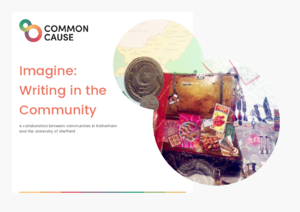 This case study was produced in 2018 as part of the Common Cause Research project.

Imagine: Writing in the Community was part of a broader initiative called 'Imagine', a five year project from 2013 to 2017, delivered by a consortium of lead universities including the Universities of Brighton, Durham, Sheffield and Huddersfield and a network of community partners. The focus for the overall Imagine project was the context of civic engagement with a significant emphasis on the co-production of research through Community University Partnerships (CUPs). The Imagine programme had four work packages: The Social Context; The Historical Context; The Cultural Context; and The Democratic Context. The University of Sheffield coordinated the Cultural Context work package which included a strand called ‘Writing in the Community’ as one of several projects delivered in partnership with communities.