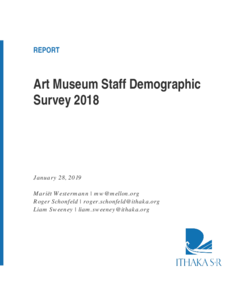 In 2014, the Andrew W. Mellon Foundation, Ithaka S+R, the Association of Art Museum Directors, and the Alliance of American Museums undertook an effort to measure the demographics of the staff of US art museums. The report, published in 2015, found that the museum population was about ten percentage points more racially and ethnically homogenous than the US population, and that in the positions of curators, educators, conservators, and museum leadership there were further barriers to entry for people of color; people holding those positions were 84 percent white non-Hispanic, four percent African American, six percent Asian, three percent Hispanic, and three percent two or more races.

Since the 2015 study the Mellon Foundation has invested in several initiatives that can help us understand better the challenges museums face when working to diversify their staff and to make their museums more welcoming and accessible to people of color, whether they be trustees, staff members, or museum users. The foundation partnered with Ithaka S+R to conduct a series of case studies investigating the inner practices of eight art museums as they work towards realizing the values of equity, diversity and inclusion internally and with the communities they serve. We continued and expanded an undergraduate curatorial fellowship program that is coordinated by the Los Angeles County Museum of Art and operates in six cities, where students of color and others dedicated to making museums more open and inclusive are exposed to curatorial and other museum functions. These undergraduate fellows are then encouraged to pursue graduate education in preparation of potential art museum careers. We also strengthened our investment in Spelman College Museum’s curatorial studies program, and have embarked on an initiative with the Ford Foundation, the Walton Foundation, and the American Alliance of Museums to work towards increasing board diversity in the sector.[4] A field-specific initiative across the country to strengthen the curatorship and conservation of Native American art is growing the pool of Native art museum specialists.

In order to gauge the extent to which progress has been made since 2015 towards increasing staff diversity in art museums, in 2018 we undertook a second iteration of the demographic survey, partnering again with AAMD, AAM and Ithaka S+R. The aggregate findings are presented in this report. We are extremely grateful to the 332 art museums that responded to the survey. It is especially helpful to have received responses from 136 institutions that had also submitted their data in 2015, allowing for direct comparisons over time for that cohort.

At a high level, the study has found some meaningful progress in the representation of people of color in a number of different museum functions, including the curatorial. We also found an increase in the number of women in museum leadership positions from 2015 to 2018. Nevertheless, the data also shows that progress has been uneven. While trends in recent hiring are encouraging, certain parts of the museum appear not as quick to change, especially the most senior leadership positions.

This second demographic survey of art museums offers a snapshot of change that is overdue, slow, but also real and welcome. These results show that diverse hiring is entirely possible, and encourage all of us to do more to realize that potential. The Mellon Foundation looks forward to continuing to work with our many partners across the field on the great task of making American art museums representative and inclusive of the rich diversity of our country, so that their collections and programs may be a significant and joyful resource for all.