A Look at the Practice and Its Progress 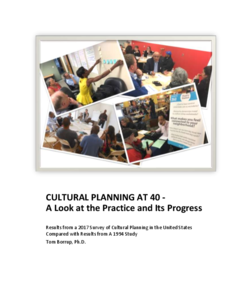 Hundreds of cities and towns in the United States have carried out formal cultural planning over the past 40 years – from cities as large as New York, Los Angeles, Chicago, and Houston to some as small as 1,500 to 5,000 in population. Cultural plans provide local governments a powerful tool for setting cultural policies on the municipal level as well as a vehicle to organize the capacities of arts and culture organizations, their supporters, and artists to make a difference in their communities. This now global practice arguably began in the U.S. in the late 1970s.

A study led by Dr. Tom Borrup of Creative Community Builders, sheds light on the aspirations, accomplishments, shortcomings, and methods used in cultural planning over the past decade and compares it with a similar study from 1994 by Dr. Craig Dreeszen.

Overall expectations of cultural planning have increased significantly since 1994, the study finds. Serving community interests outside the sector’s own needs represents the largest change and most of the reported outcomes. In addition, one of the highest ranked outcomes the 2017 study identifies has been the arts and cultural sector’s ability to organize for advocacy, representing the most significant change since the earlier study.

Community-wide cultural planning helps formulate aspirations and action strategies but doesn’t assure results. Among the areas of highest expectation reported were to make greater community impact, apply cultural assets to civic priorities and to learn to add value to the community. What this study shows is that cultural planning has helped local cultural sectors broaden their roles in their communities in areas such as tourism promotion, local economic development, use of public space, and many other. Where cultural plans have also set their sights but outcomes have fallen short are in cultural equity – expanding resources for under-represented groups including immigrant populations, removing barriers to participation, and bolstering education and youth development. Fewer than half of cultural plans included specific actions to address issues of diversity, equity, and inclusion.

Definitions of “culture” as expressed by the range of community resources included in plans has also expanded but not as broadly as outside marketing research suggests the general public has come to understand culture.

During the nearly 25 years between the two studies, cultural planning has become more professionalized and employs more sophisticated data gathering and community engagement techniques. While more city governments have made larger investments in cultural planning, there was no significant increase in the percentage of cities that formally adopt cultural plans into their general or comprehensive plans.