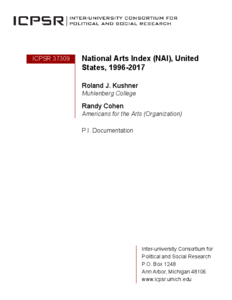 The National Arts Index is a highly-distilled annual measure of the health and vitality of arts in the U.S. using 76 national-level indicators of arts and culture activity. This report covers an 11-year period, from 1998 to 2008. This National Arts Index encompasses one of the largest collections of data on arts and culture in the U.S. ever assembled. The information has been gathered from reputable government and private sector sources and covering multiple industries—nonprofit and for-profit arts organizations, artists, funding and investment, employment, attendance and personal creation, and much more.

Readers can compare the 76 indicators and draw their own conclusions about the state of the arts, but as a comparative measure we have averaged all 76 indicators, which gives us a single number we can compare from year to year. As a baseline, we chose the year 2003 and set it at the number 100. The 2008 National Arts Index score is 98.4, a decline of 4.2 points from its 2007 score of 102.6 (2003=100). A score of 105.5 would return the Index to its highest point, measured in 1999. In addition to a single summary score, we can track many themes and trends:

Many of us have experienced the realities these figures indicate. Only now, however, do we have the research to underscore our observations on a national scale, to track if conditions improve or worsen, and gauge the effectiveness of remedial efforts designed to strengthen the arts. We will publish Index updates every October, during the annual National Arts and Humanities Month