'Looking for the Blue, the Yellow, all the Colours of the Rainbow' 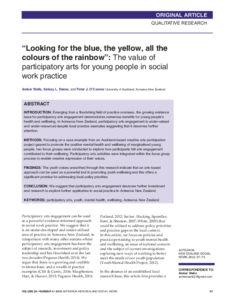 "Participatory arts engagement can be used as a powerful evidence-informed approach in social work practice. We suggest that it is an under-developed and under-utilised area of practice in Aotearoa New Zealand, in comparison with many other nations where participatory arts engagement has been the subject of research, investment and policy leadership and has flourished over the last two decades (Pegasus Health, 2014). We argue that there is a growing and credible evidence base, and a wealth of practice examples (Clift & Camic, 2016; Macpherson, Hart, & Heaver, 2015; Pegasus Health, 2014; Putland, 2012; Secker, Hacking, Spandler, Kent, & Shenton, 2007; White, 2009) that could be utilised to address policy priorities and practice gaps in the local context.In this article, we focus on policies and practice pertaining to youth mental health and wellbeing, an issue of national concern and the subject of current investigations exploring new ways of working to better meet the needs of our youth population (Youth Mental Health Project, 2012)."